" 15%OFF-ONLINE-POSTCNY2023 " Coupon Code (256/288 Coupons Available) - 15% off all services purchased from our online store at Shop.Geomancy.Net Only. EXCEPT NOT VALID FOR: House Hunting Related Services & All Home Consultation Services, and ANY services on promotional offers. Valid until 18 Feb 2023 or while stock lasts!

Written by Geomancy.Net. Posted in Fun with Feng Shui.

Yin is said to exist in Yang and Yang exists in Yin. This changing combination of negative and positive, dark and light, cold and hot which keeps the world spinning creates Qi or the  life giving force of the universe.

Below: A 17th century Chinese painting  showing the 3 deities:
(from left) Longevity (in yellow) dress, Prosperity (in blue) and Luck (in brown)  looking at a scroll of the yinyang symbol 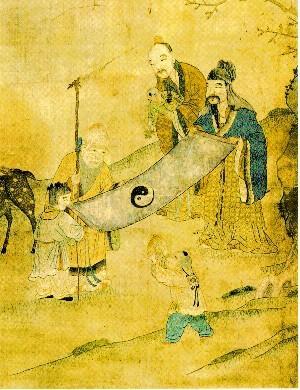 The female principle of yin is associated with the earth, with the North and cold. Originally, Yin  means `shady side' which is the side of a mountain which is not facing the sun. The word is also used to mean the dark, cold room in  which ice was stored in summer. Yang is related to Heaven, South, the  Emperor, the dragon and all uneven numbers are yang-numbers.

In the Eight Trigrams: Yin-lines are "broken" e.g the

trigram while Yang-lines are continuous and "unbroken". For example,

The remaining 6 trigrams are made up of a combination of both yin and yang lines: